Billen Cliffs eco village is a tranquil sustainable community set amongst bushland and cliffs 1.5 hours drive inland from Byron.  I spent a week there helping to build an eco house through Help Exchange (HelpX) Being offline and offgrid in the lush green Aussie bush had a real impact on my state of mind and ability to reflect and learn. Doing hard physical labour meant I felt fit fast and slept really well.

I created a profile on the HelpX website after learning that a friend had got her ‘visa work’ done voluntarily through the site. She’d stayed near Byron and done a few hours per day nannying and gardening for a family who owned a farm. I was planning to apply for my second year visa and needed to do the qualifying work.

A few days after joining the HelpX site I was excited to get an email from a guy called Dan* inviting me to stay and help him and his family build their eco house. (I’d noted my interested in eco houses in my profile) I flew to the nearest airport and arrived after dark. Dan picked me up and drove me through winding dark country lanes in a car that looked like it was from another era. The village was extremely remote – just what I’d hoped! It wasn’t until the next morning I actually saw the place in the light… 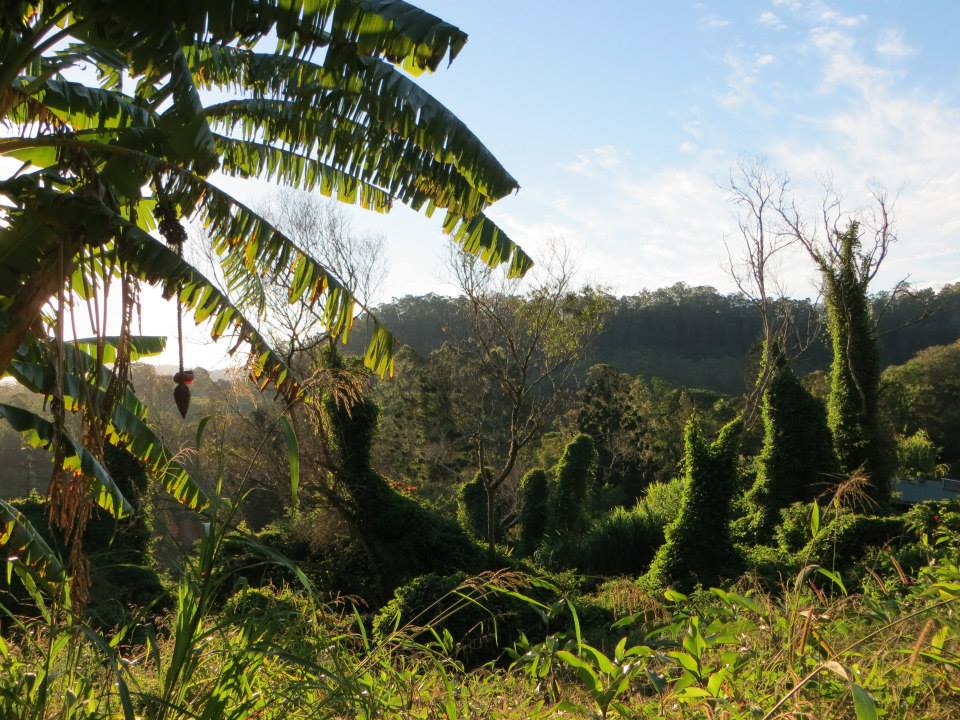 Lush tropical green all around! One of the first things that struck me was the air – so fresh and sweet-smelling. It really felt like far better quality air compared to polluted city air. Breathing in felt like nourishment in itself. The village is set on semi-rural lush green bushland overlooked by big limestone cliffs. The homes have plenty of space around them, and a main track going round the village with a community hall in the middle. The land is fairly undulating and hilly, so some homes are higher up with views over the green lush land. An eco house in Billen village

The HelpX host family’s existing house had burned down and they were rebuilding it from rubble. The plot was on a hill above the tree tops, with their rustic eco home only partially constructed. It wasn’t overlooked as most of the homes were so spread out with trees in-between. One other HelpX volunteer was staying – a young guy from Western Australia. In the the top left picture you can see their outdoor shower overlooking the trees. To shower you’d fill a bucket, take it over and attach it to a hook above your head, it was surprisingly effective and so invigorating to shower amongst nature. There was no screen and the shower opening faced the house… Which seemed odd given all the HelpX volunteers they had. I’m no prude, but Dan was often on the porch working, directly overlooking the shower, so I used a sheet to screen myself while showering! A nearby lake with a waterfall

The area surrounding Billen was pretty wild and remote, with no phone signal in most areas. Above was a waterfall and small lake I visited with some other helpers and the neighbour, *Bill. Being offline and offgrid felt so freeing after a few months working in an office in Melbourne. 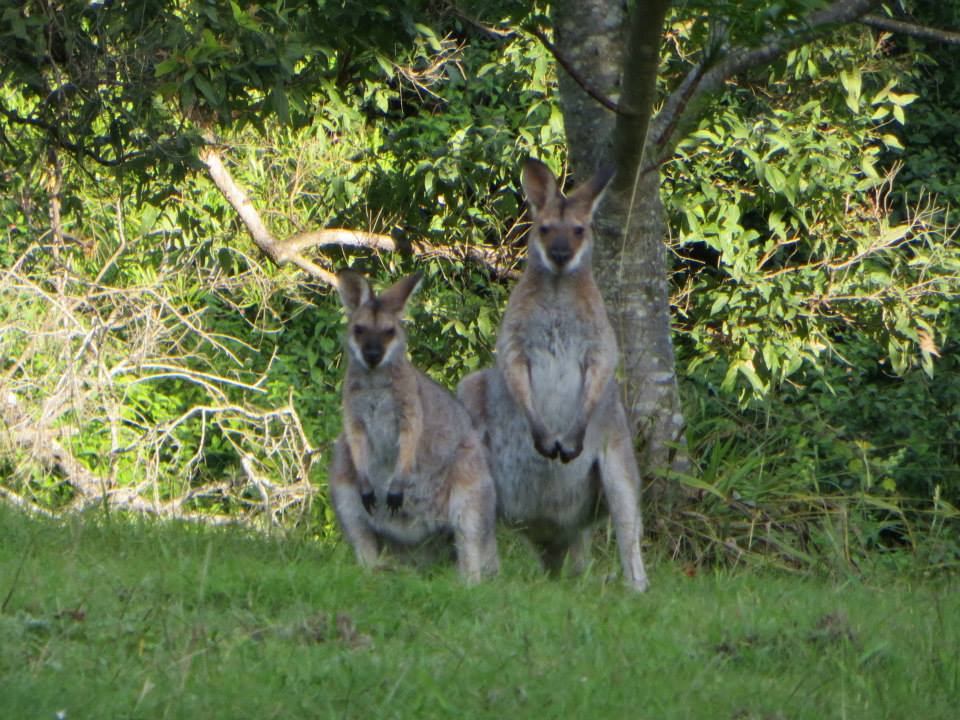 I felt reinvigorated and free being reconnected to nature, listening to the whip birds, seeing dozens of wallabies (some with babies!) and smelling wood smoke drifting through the trees. I wandered around Billen eco village one evening and snapped photos of the local fauna and flora. Everywhere I looked there was something novel to see! 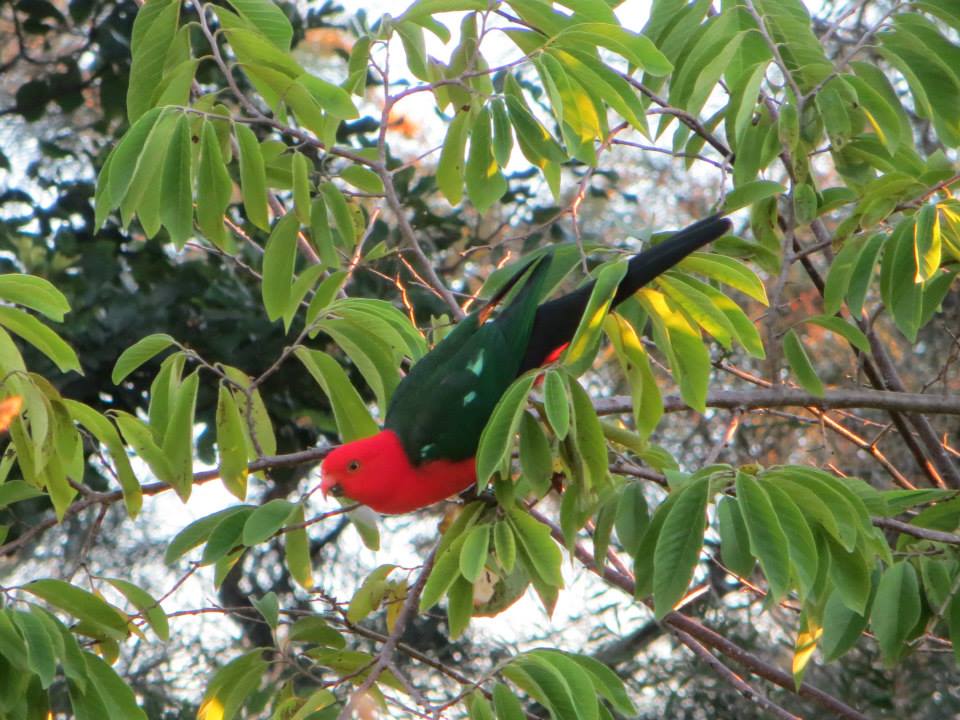 Colourful parrots… fluffy pink flowers that looked like something from another planet! (below) One of many tropical plants

And all-orange washing and hammock on a sunlit porch. I could really imagine living somewhere this peaceful. 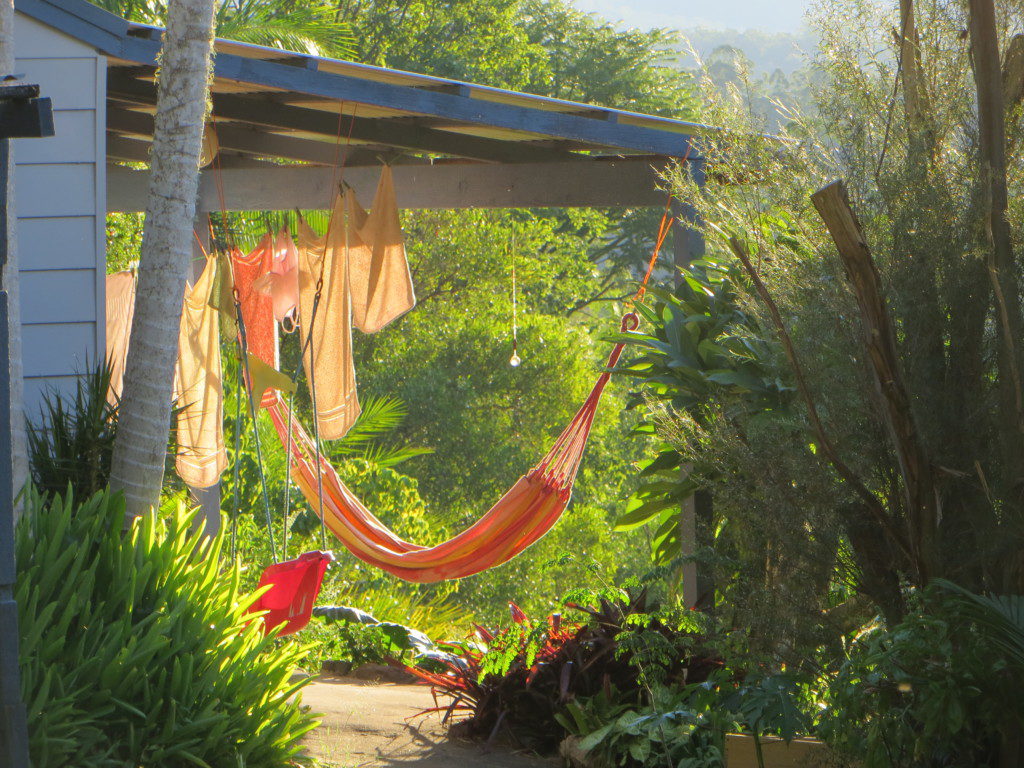 A hammock on a neighbour’s porch at sunset

The tasks we did varied each day – we spent the first day digging, levelling and manuring a new veggie garden. The second day was spent weeding pumpkins and shovelling earth, the third moving and splitting wood. At times it was very demanding in the midday sun, and five hours per day was a lot for this type of work. 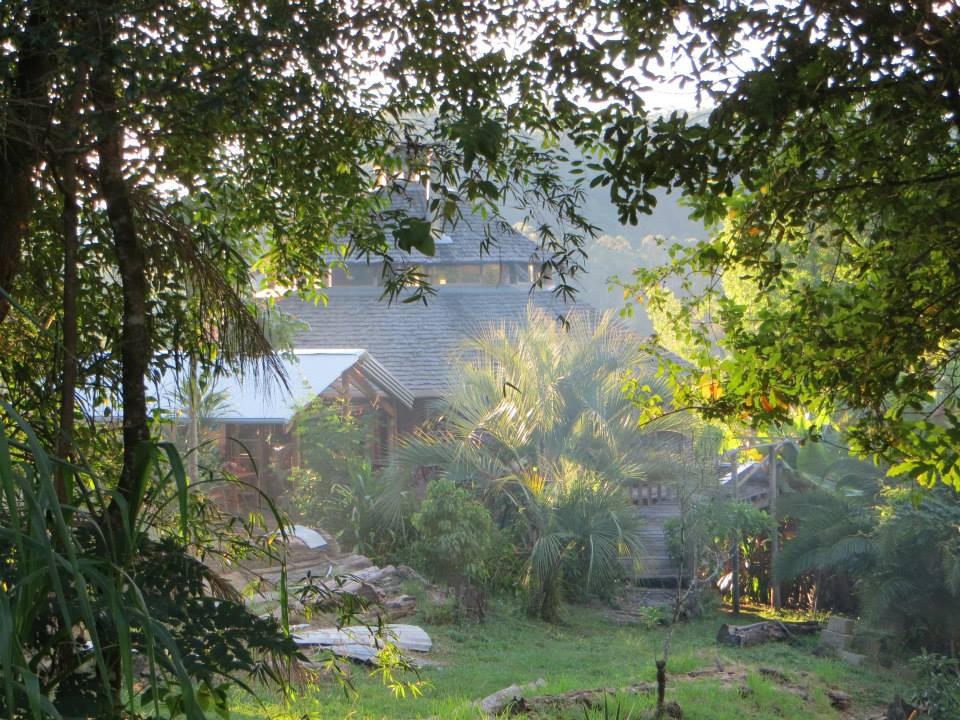 Woodsmoke drifting through the village

One day while we were cutting and stacking wood we uncovered a load of cane toads. I’d never seen them before and one of the guys insisted on killing them with a spade as they’re non-native and kill all the native creatures.

As if that wasn’t horrifying enough, moments later I spotted a small brown snake which I’d read could be deadly. One of the chickens chased it and in seconds the chicken was dead. It literally fell over and died with it’s feet in the air.. they put the dead chicken in a bucket with the cane toads. “The bucket of death” It felt great doing physical work after months in an office – I was energised and alive, in the moment and happy. I can’t believe how toned I got in only a few days! And I slept so well.

The combination of being so physically active with the dark peaceful nights did wonders for my sleep (which had been bad in Melbourne) Despite woken at 6 each day and going to bed after midnight most nights. The stars at night were bright and clear; it looked like the skies were wide open and you could see the whole milky way. There was a guy called *Bill living down the hill who built his own little house and outdoor solar shower (above and below) It was such a cool set-up! 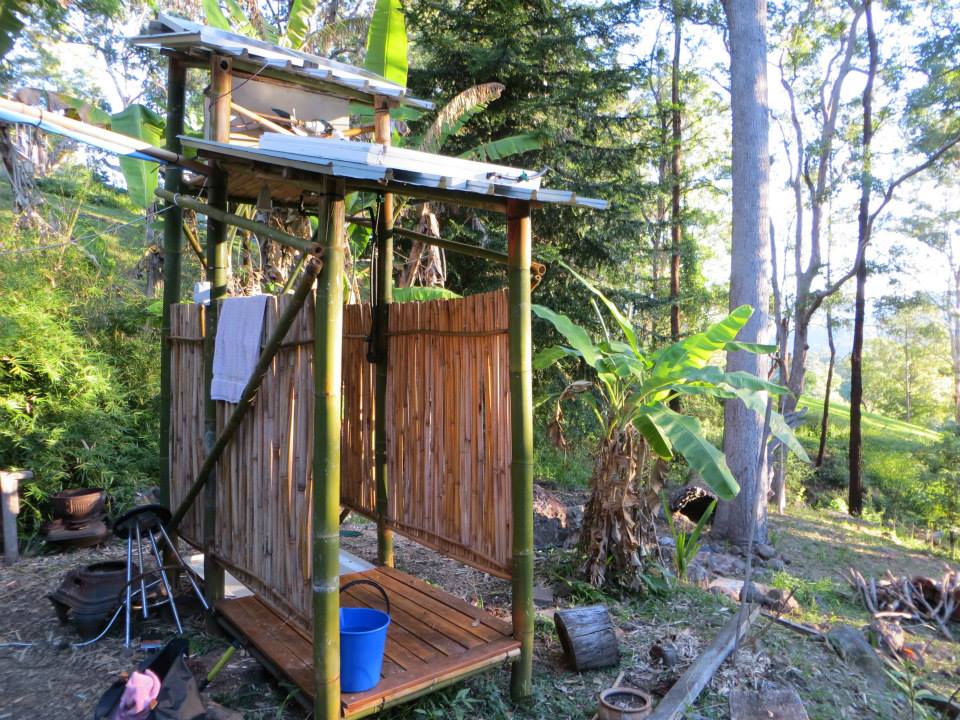 He barely needed anything to live. The fire also worked as backup heating with pipes running under it to the shower so it could be used at night too. We got on pretty well and I ended up spending a fair bit of time there. 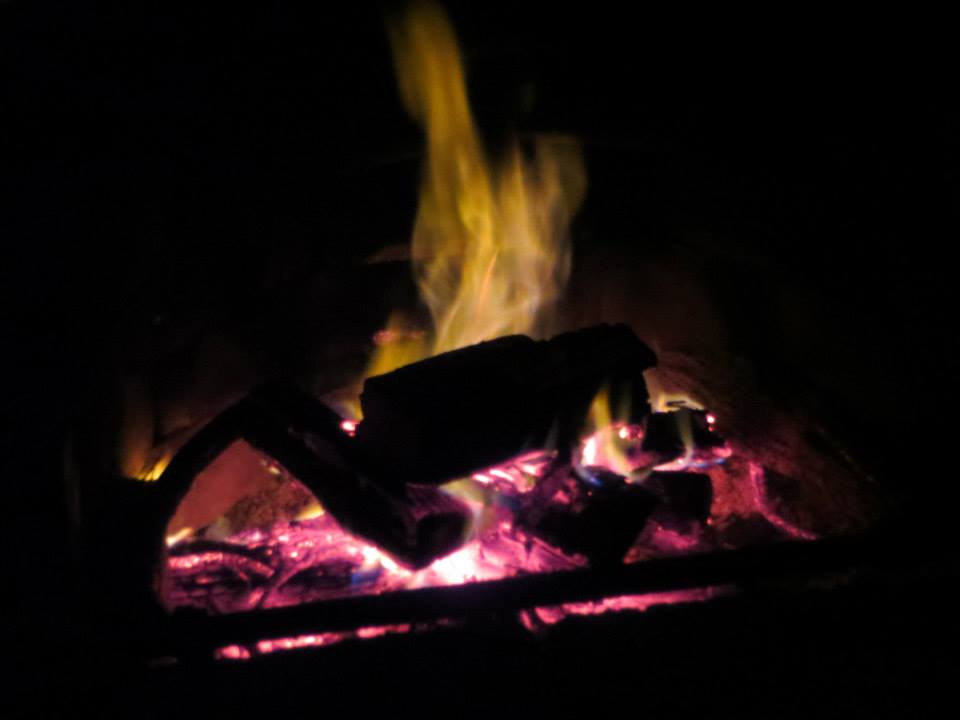 One night we all sat by the wood fire chatting. I’d just had a shower in the solar shower and came to dry my hair by the fire. As I hung my head upside-down to dry it I realised how long and frizzy the ends had got. 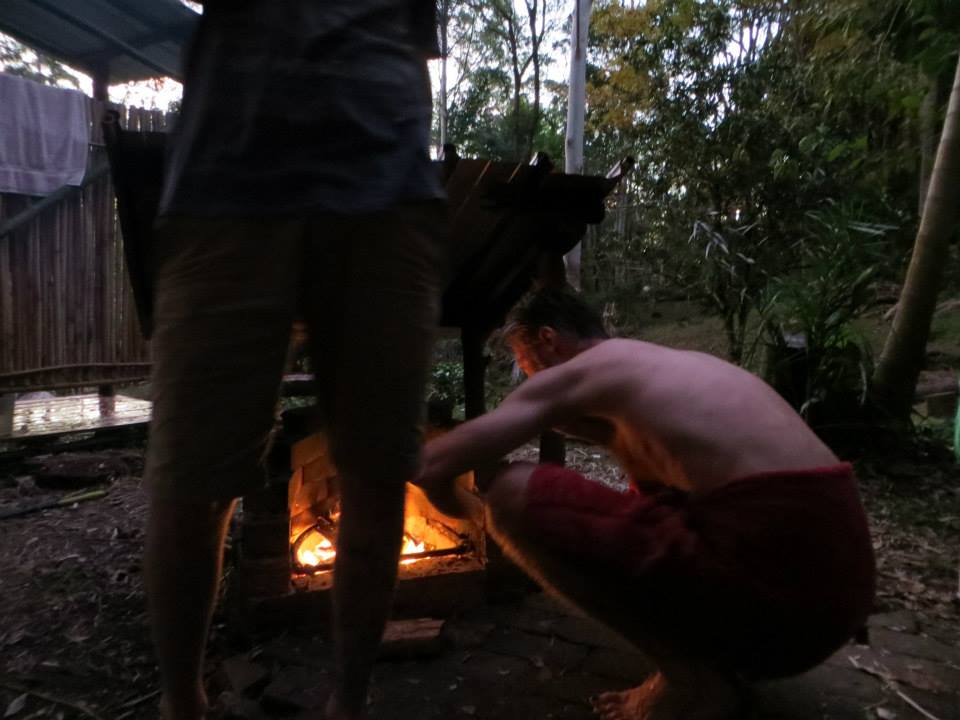 The other volunteer’s brother offered to cut my hair for me…the fact I agreed is surprising enough. I guess I just decided it was so long it couldn’t go too far wrong. I heard a hacking noise…he had cut about ten inches off and it has gone from reaching my back to barely fitting in a pony tail. The fact I took it in my stride and accepted this drastic unexpected crop really reflects how relaxed I’d become! We all prepared evening meals with healthy home-grown food. There were a few fruits trees surrounding the house, and they grew a bit in the veggie plot too. 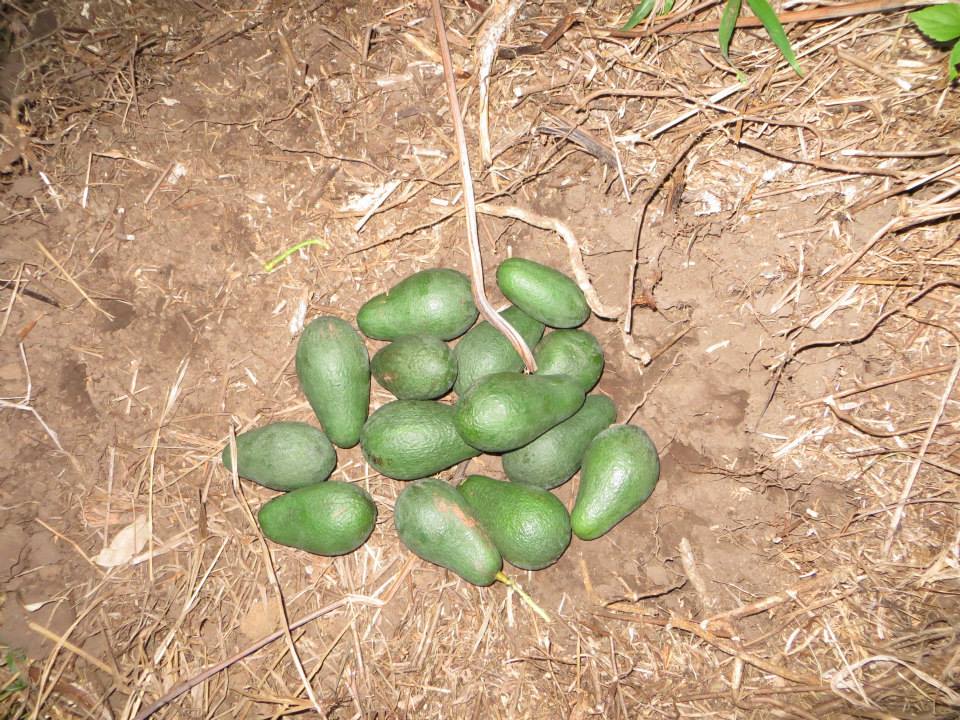 My favourite was the avocado tree! I’d never seen avos growing before so it was really exciting that they were ripe! Bill climbed the tree to get to some we couldn’t reach, and fell from quite a height onto his back! Wallabies would appear before sunset, looking for food. They would get fairly close but were still wild and cautious. One of my favourite memories was the smell of wood smoke from bonfires, and the sound of piano music drifting up from the neighbour (bottom right) who was a lovely friendly lady who had moved there after her husband “went mad and left”.

One of the main things I learned was what a huge impact being in nature and doing regular serious physical work had on my wellbeing and mood. I felt so ALIVE and human.

Fires and chatting in the evening, and gathering and preparing food together are such basic human activities that we don’t always get to do living in a city.  Living like that really changed the way I experienced time.

The lack of distractions and notifications meant my mind was calmer and I felt more at ease and aware of my own thoughts and feelings. I felt far happier (not that I’d been unhappy in Melbourne) and SAW and appreciated things in an enhanced way. It made me wonder why anyone would live in a city! 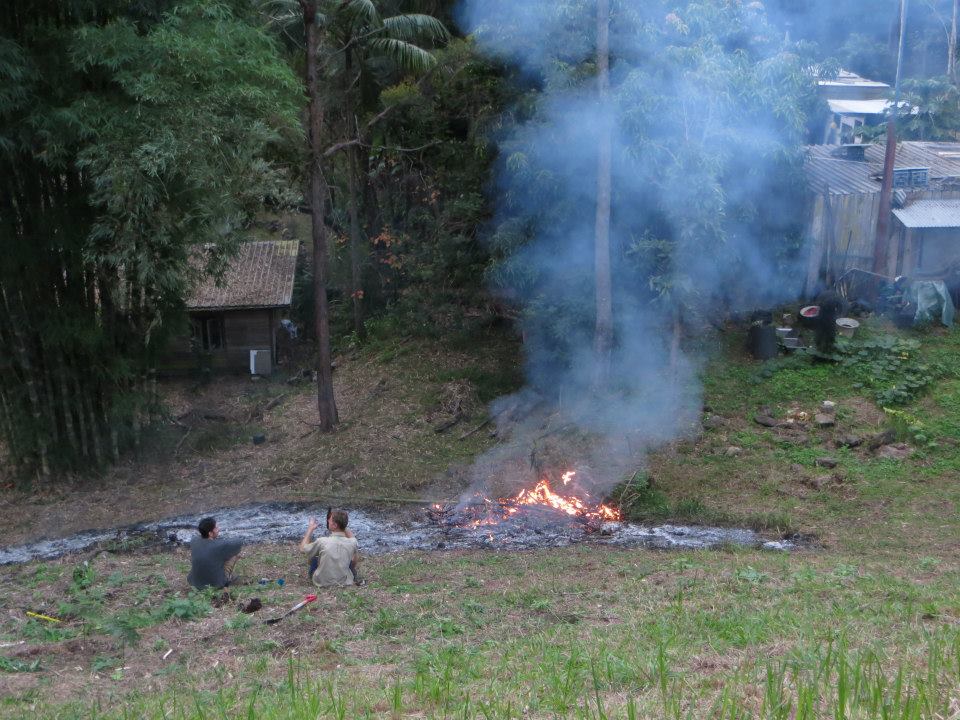