One of the highlights of sailing the East Coast of Australia was Lady Musgrave Island, a coral cay on Australia’s Great Barrier Reef, about 2.5 hours out from Bundaberg, Queensland by boat. We reached the island towards the end of our trip. 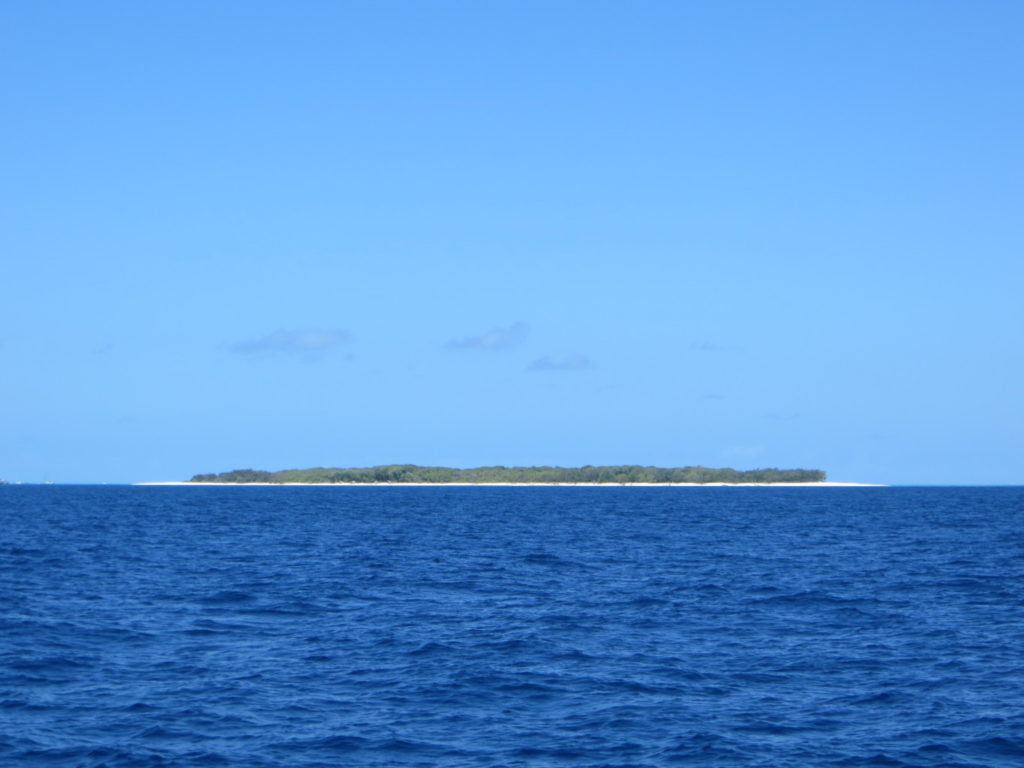 I’d wangled a free month-long sailing trip via Gumtree after posting to see if anyone needed crew or to find other travellers to team up with to hire a boat. 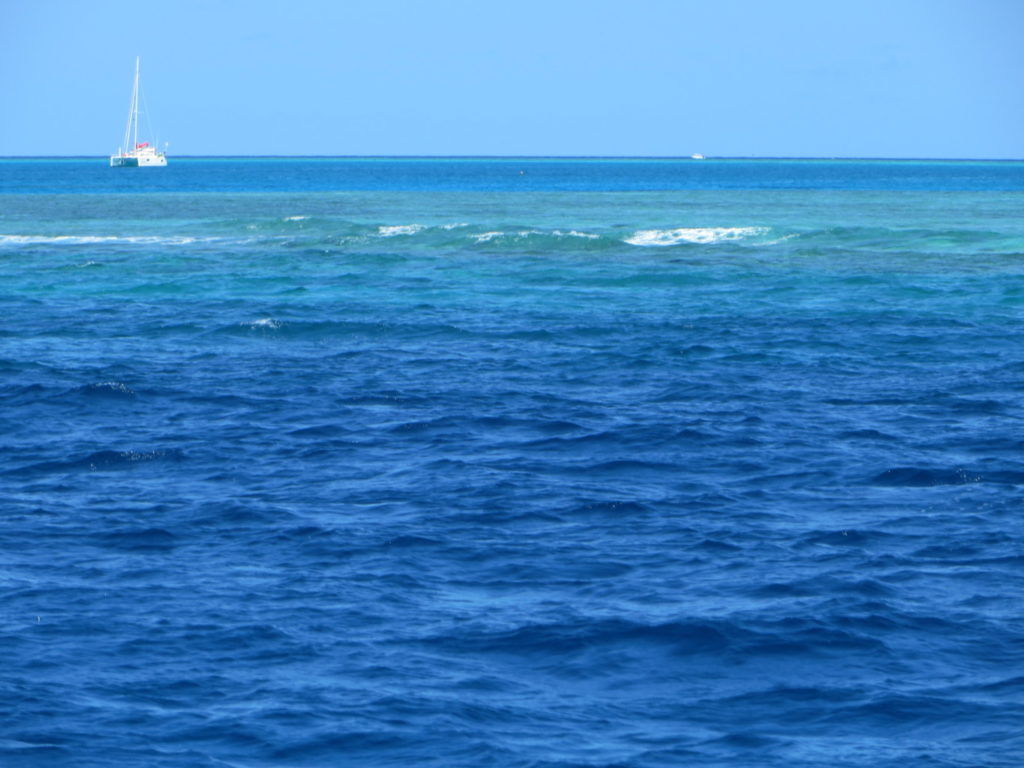 Approaching the idyllic flat white sand of Lady Musgrave island and seeing the crystal clear blue water with turquoise patches was so exciting! Sea water always seems such an amazing colour on coral reefs. The variation in the different colours of the water is incredible with stripes of pure turquoise then every depth of blue you can imagine. 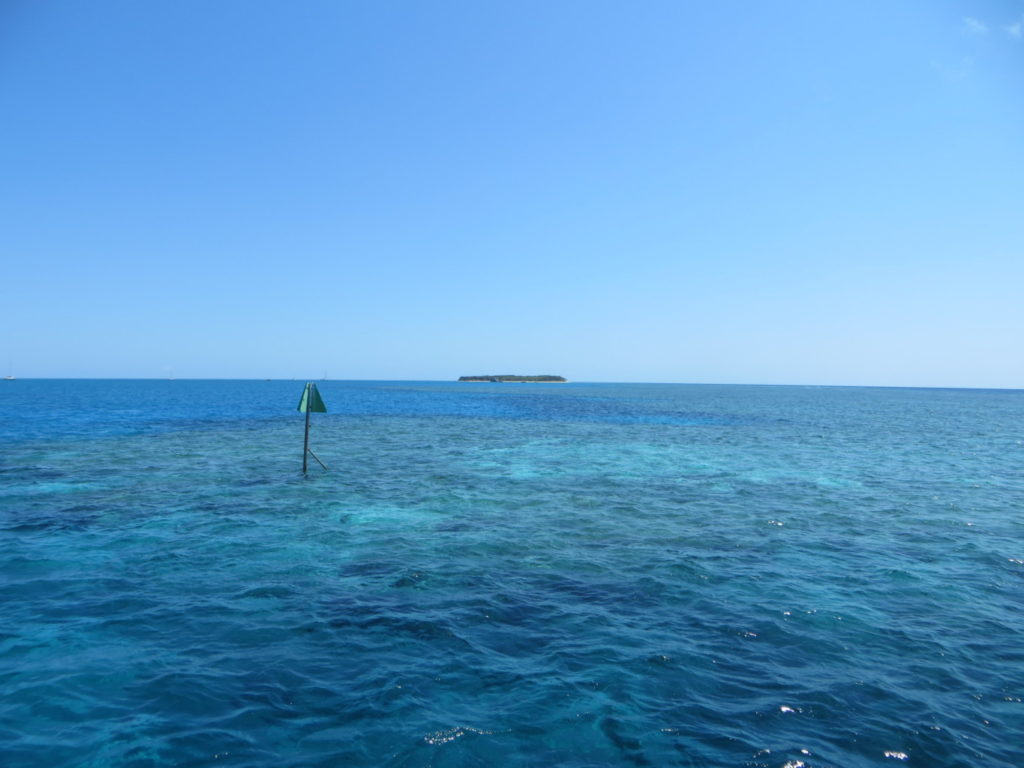 Rick had been telling me about this island very enthusiastically, and from someone who had done so much sailing to be so excited about somewhere made me think it must be pretty special. 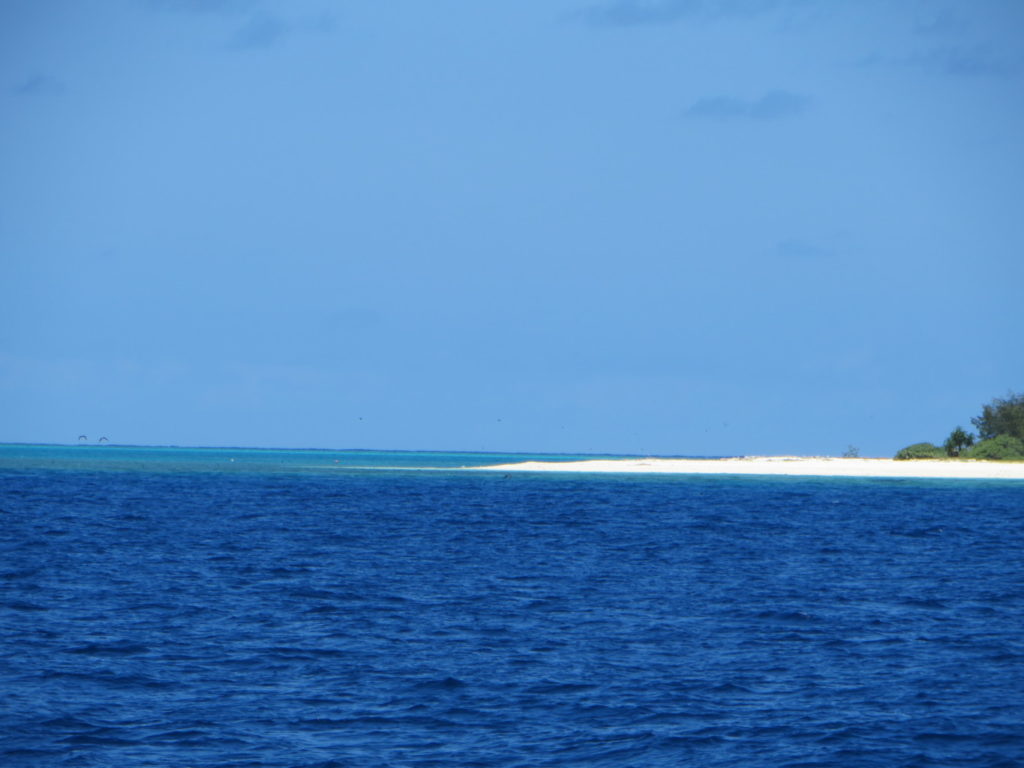 We anchored quite far out so as not to damage the coral, and kayaked to the shore rather than taking the tender boat. 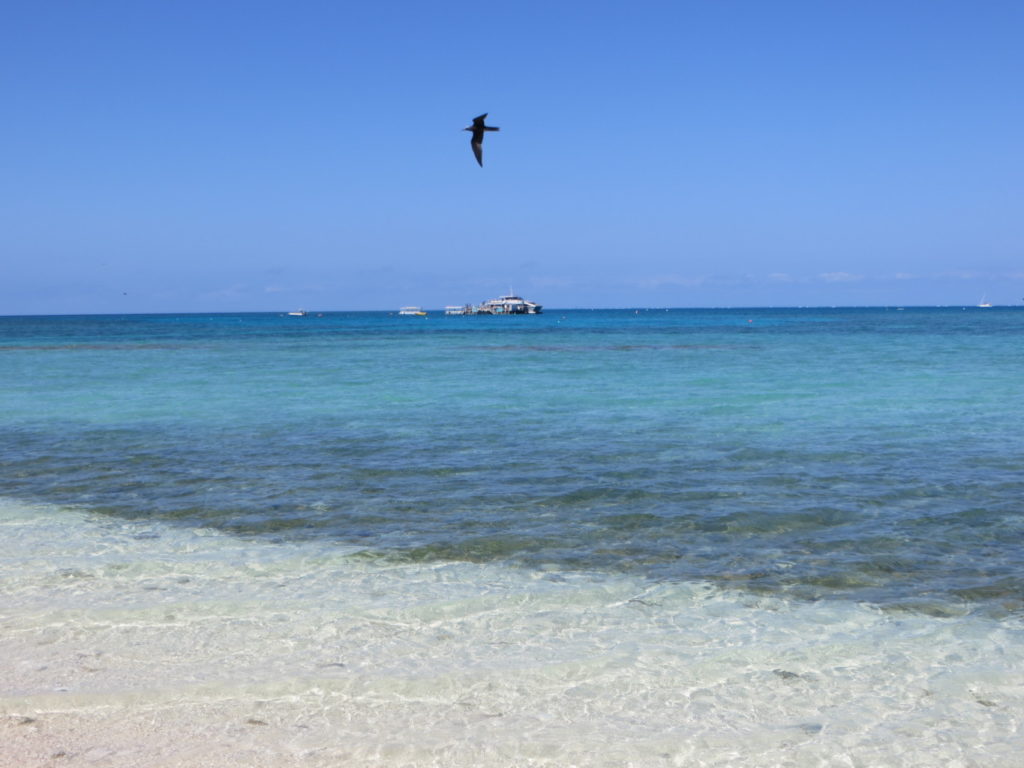 Wandering along the hot sand felt strange after rocking up in just a bikini with no bag, when everyone else was kitted out with backpacks and sandals etc. I’d only brought my camera in a waterproof bag. (check out Rick’s wonky photography skills below!) 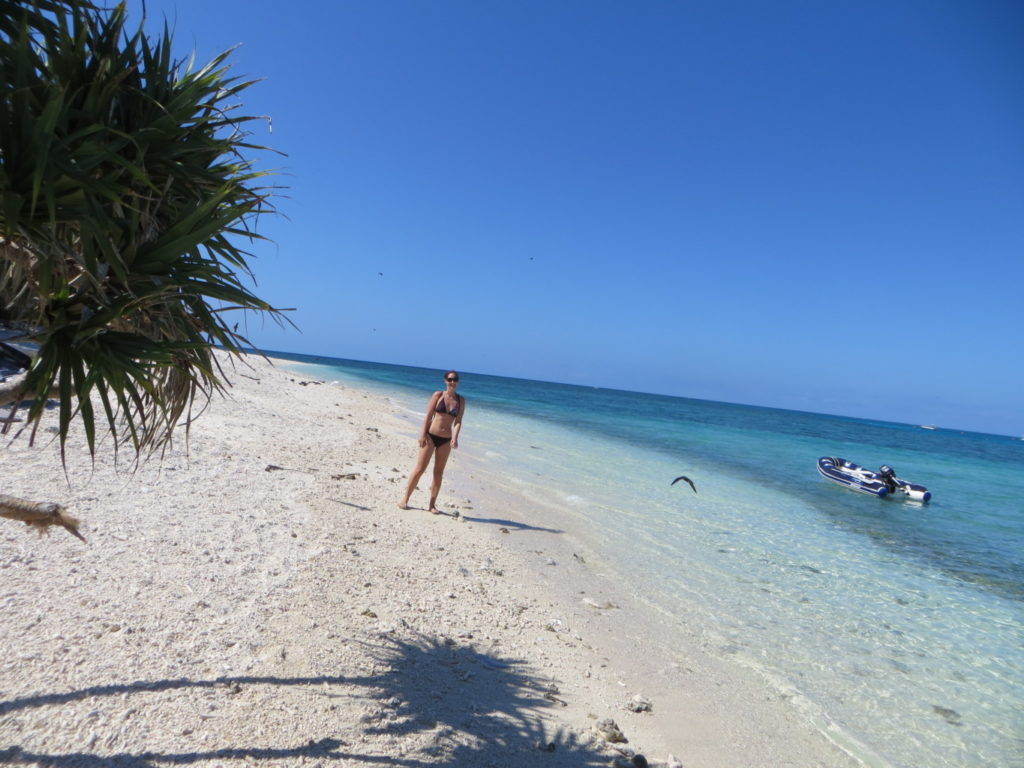 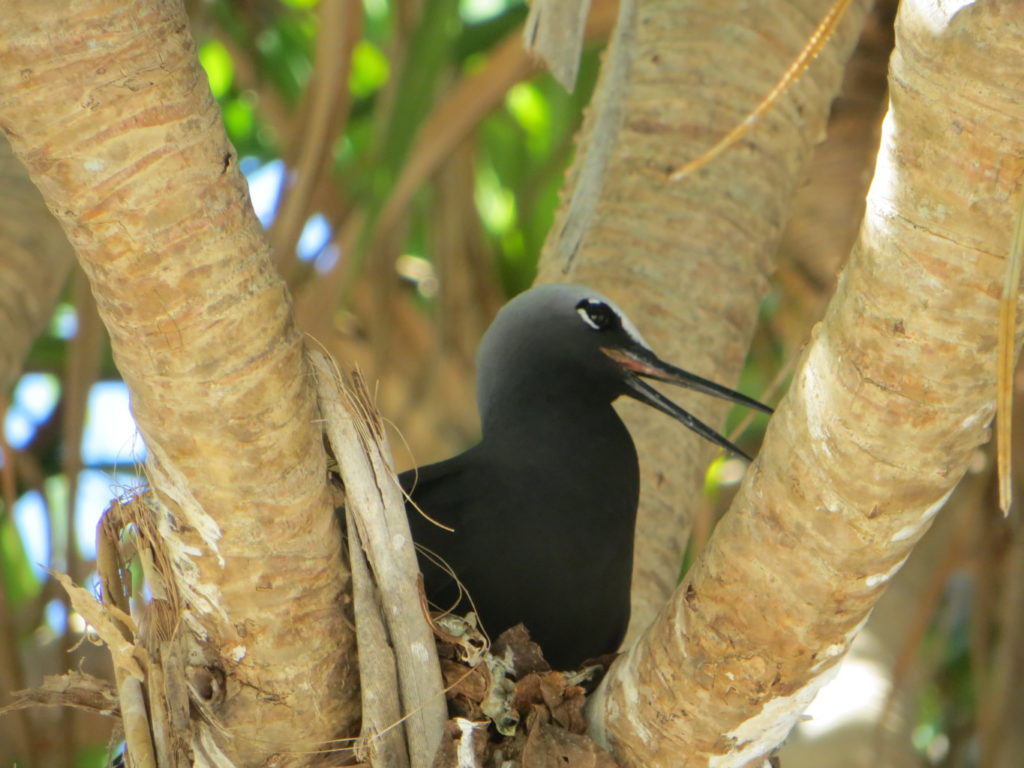 The ground was covered with bird shit there were so many of them! One of the signs said the poor birds sometimes get stuck in the sticky pisonia branches and die!! 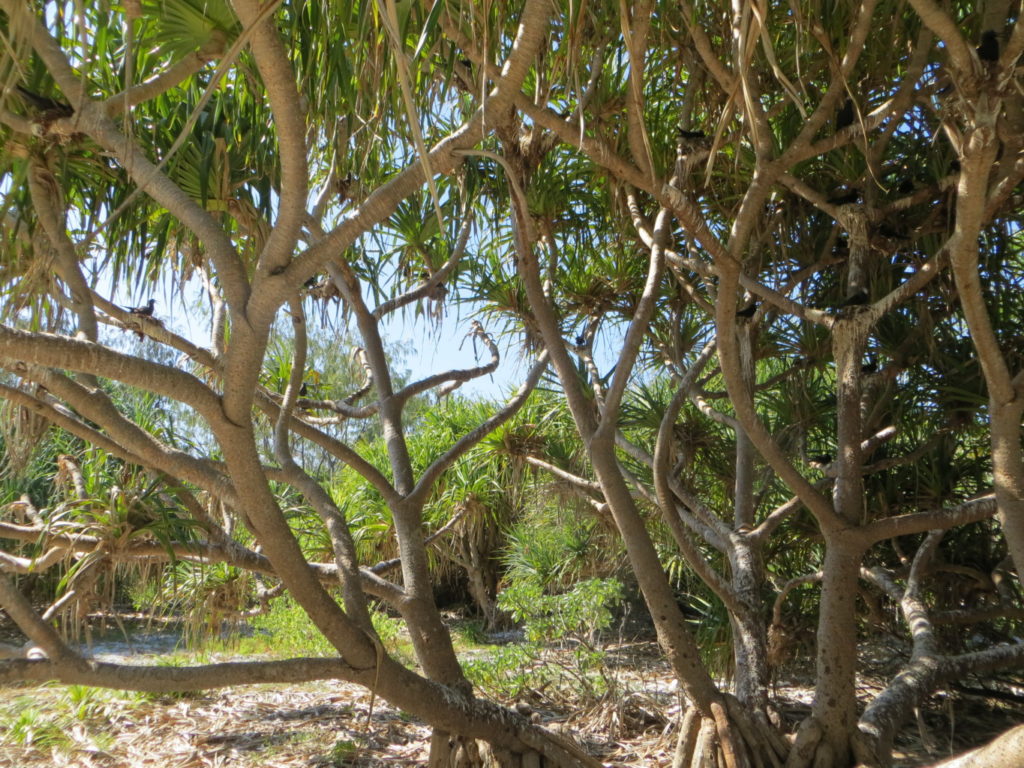 The island had a few people wandering around but not many. I always found it a strange feeling when sailing, after not seeing other people for days or weeks, to suddenly be in some sort of civilisation. I often felt like some kind of pirate invading the island. 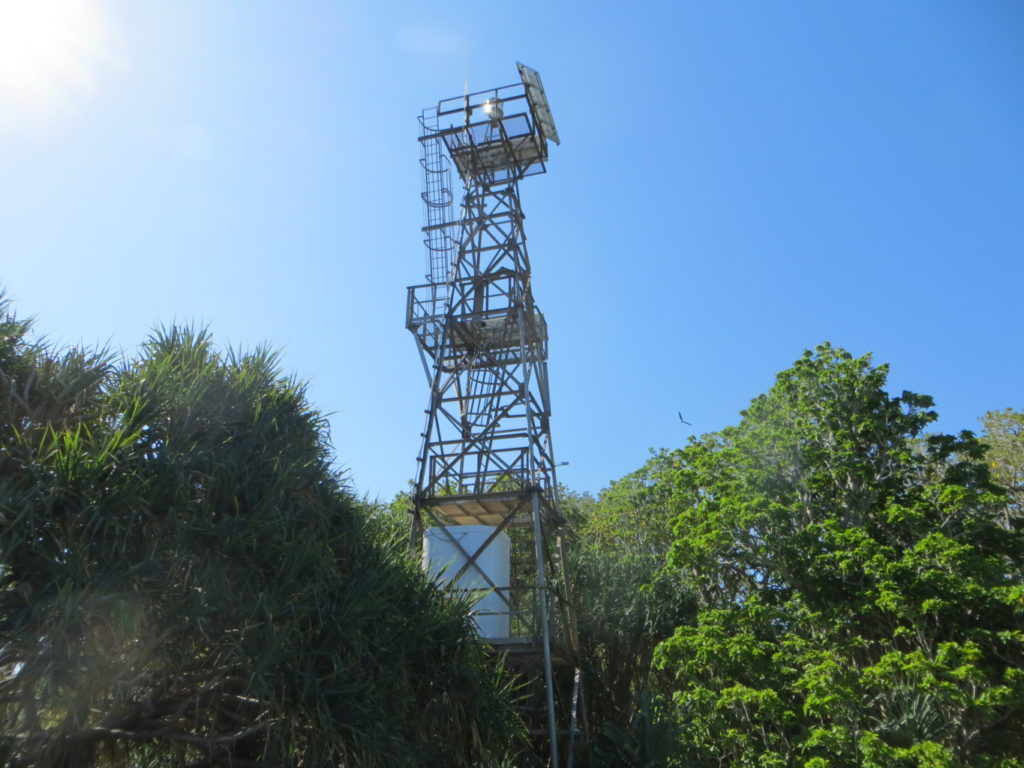 It didn’t take long to walk to the other side of the island where there was a lighthouse! 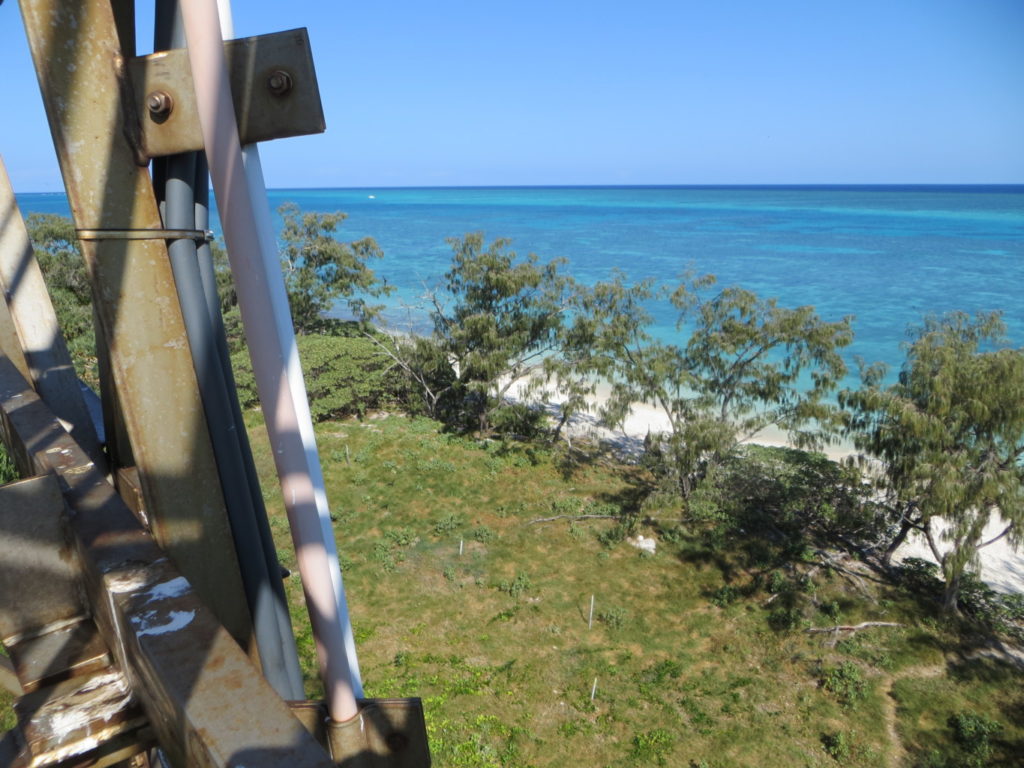 After much persuasion from Rick and wobbliness from fear of heights I climbed to the top and the view was incredible! 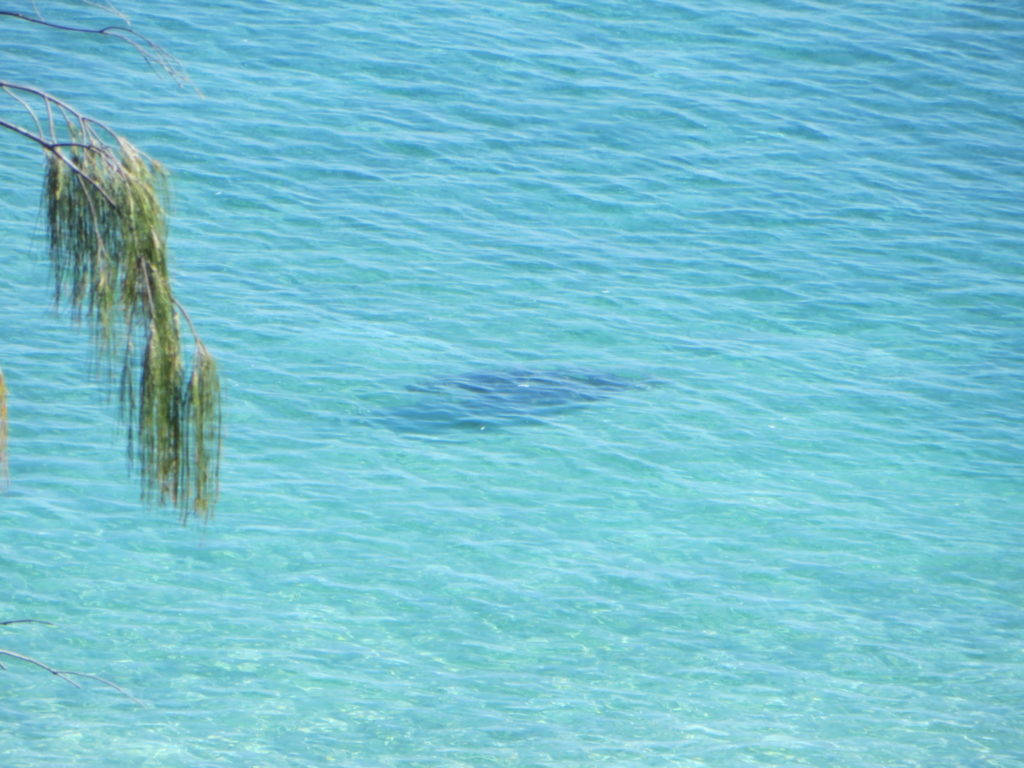 Looking out over the turquoise waters of Lady Musgrave beach we could see huge sea turtles and rays swimming through the crystal clear water below. 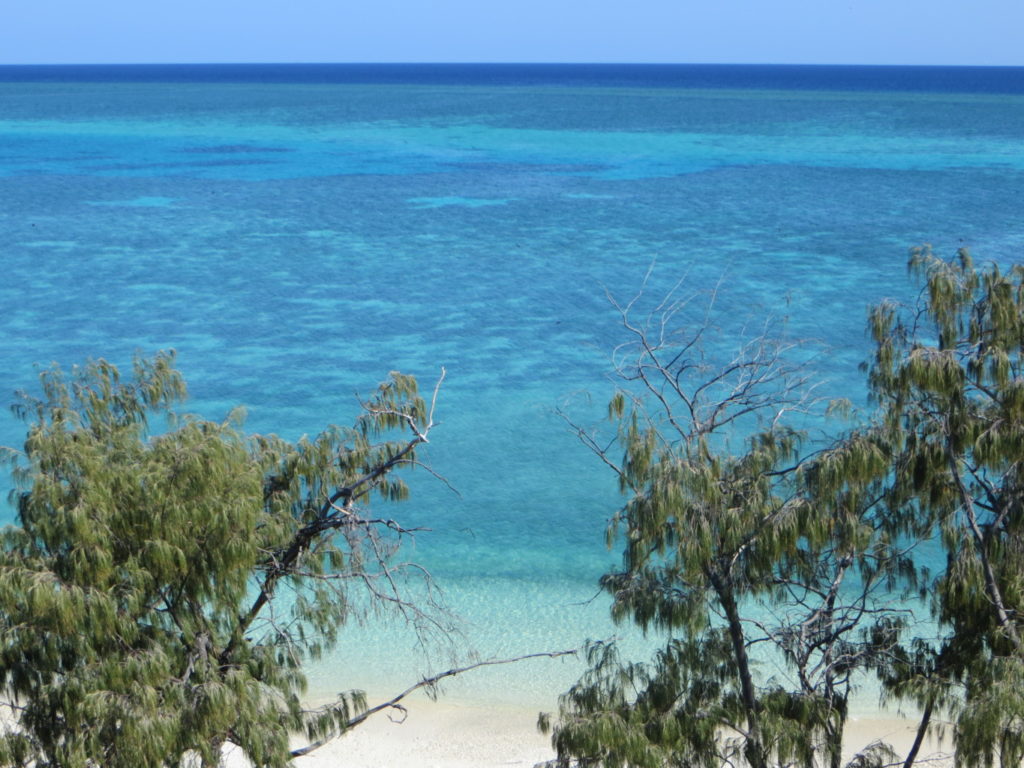 We walked back to the other side of Lady Musgrave Island before the sun set. After swimming back to the boat, I rushed in to the water with a snorkel and fins to see the amazing coral and tropical coloured fish before it got too late. It was the second-best snorkelling I remember ever (after Minicoy on the Lakshadweep islands) with an abundance of coral and fish. 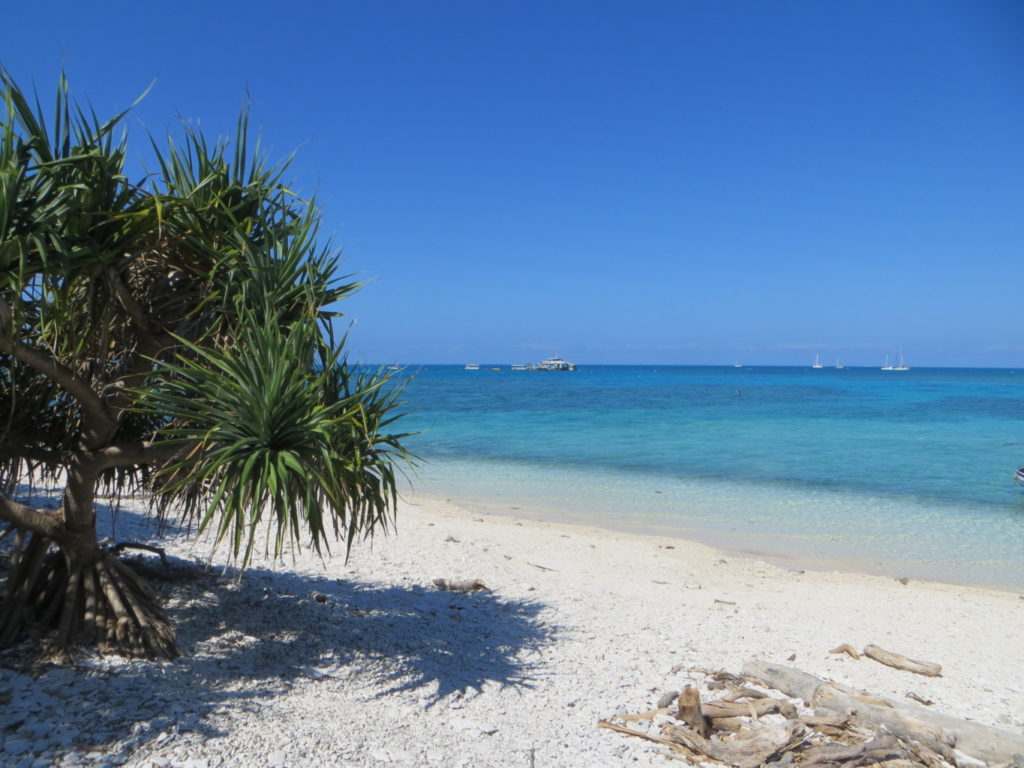 Something about the colours of the coral – mustard, mauve and coral pink (of course) – reminded me of a Bond film. The palette was very 1950s, reminiscent of the Bond films where they’re diving, and the enormous fish tank of Dr No on his underwater island. I made a mental note to make a painting of the colours, which I still must do! 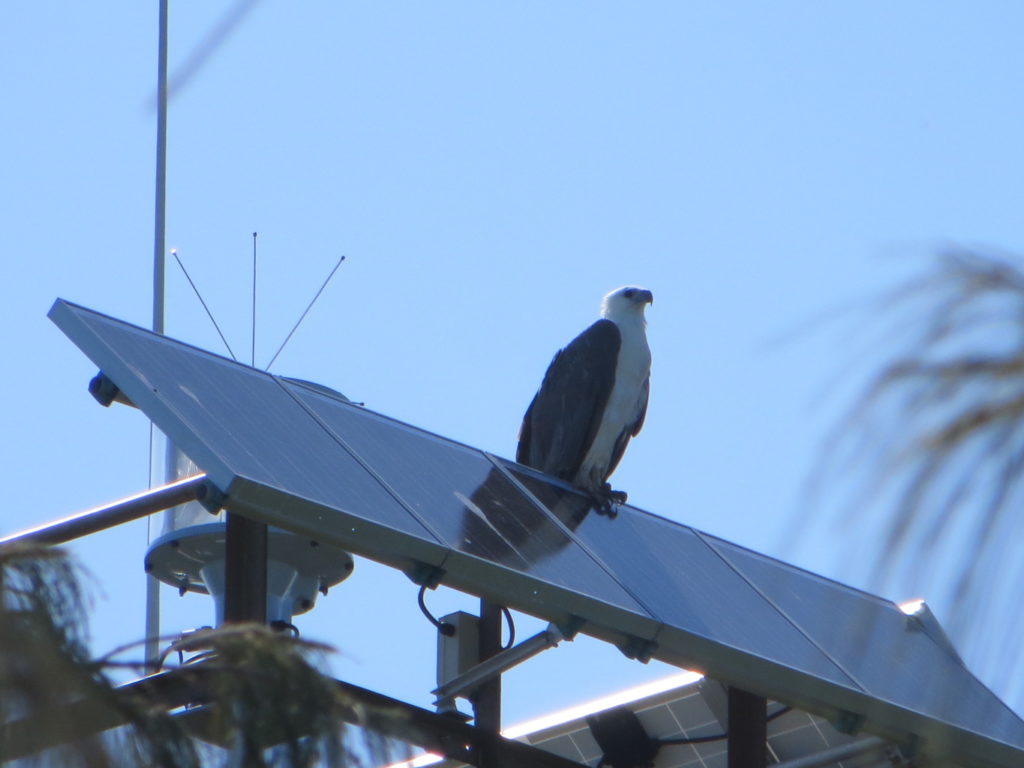 At dusk we saw jumping fish just off the island, which is apparently a sign of sharks, as the fish are trying to escape being eaten. A little worrying after I’d been snorkelling for hours. But apparently, they’d only be reef sharks which aren’t dangerous. I always felt fairly confident in Rick’s judgement of these things given he’d done so many years of diving and sailing. 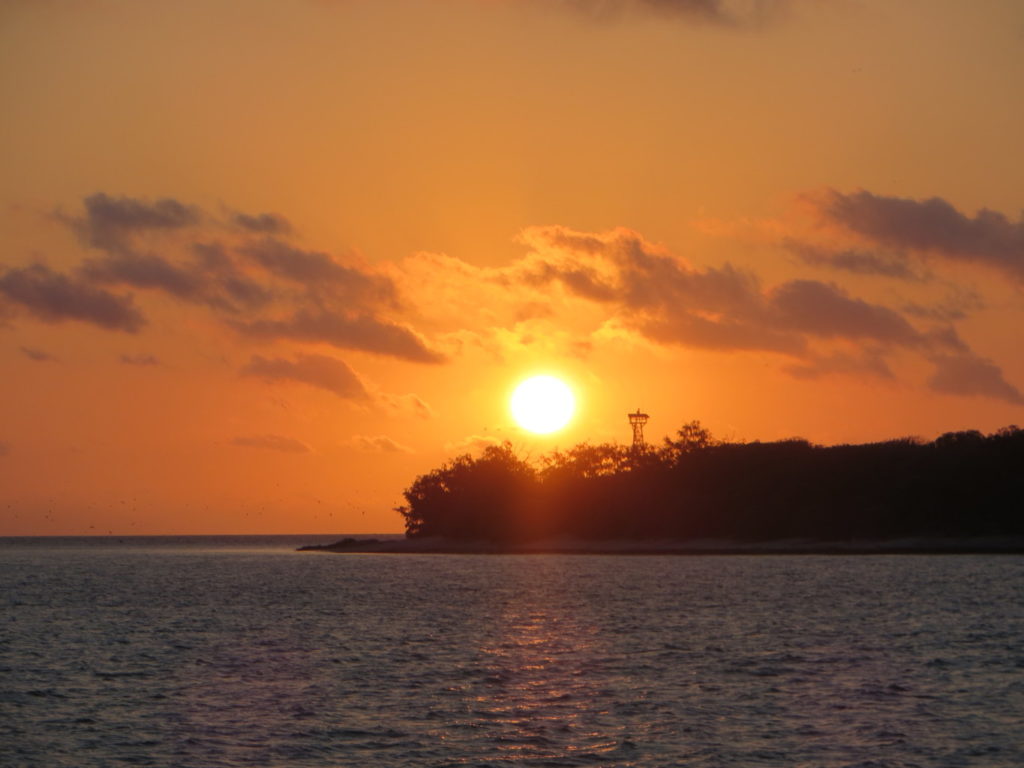 This was the last island we visited before a very long stretch to our final stop of Fraser Island. It sounds ungrateful but by that stage I was over it. Sick of being on a boat with Rick, of long stretches with nothing to do but look out over the sea or lie on the deck. I was craving an art gallery, a frappe and some intellectual conversation with people who knew and understood me. So I pushed Rick to continue sailing so we’d get to Hervey Bay, and ultimately Brisbane where my friends were, sooner. 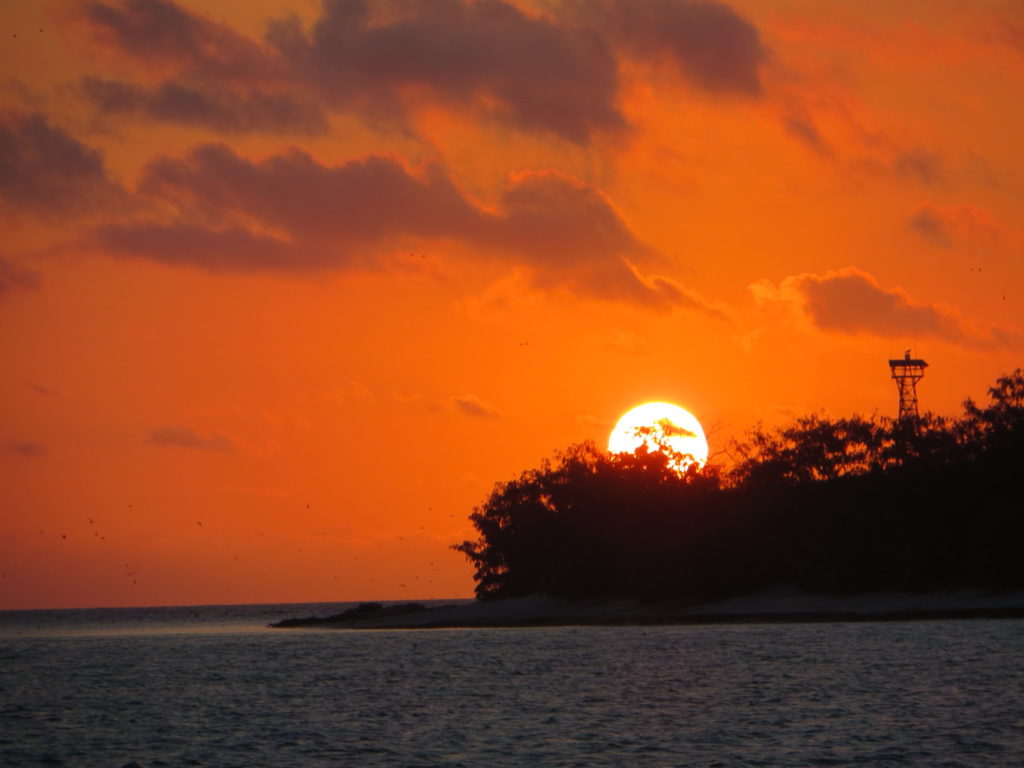 It turned out to be a bad move, as we were long beyond phone signal, and very, very far out at sea. There was a severe weather warning and we saw a dark threatening cloud rolling in on the horizon. I was scared and regretted rushing. After sundown, we ended up having to drop anchor out at sea. I would have continued steering while Rick went to sleep, but he wasn’t confident leaving me to navigate (god knows where we may have ended up!)

It was a different anchor with a long rope instead of a chain for this exposed situation. I hadn’t fully understood that once we set off we were very far from any land on this last stretch, so anchoring was different. I remember letting the anchor down and it just kept on going and going and going into the dark depths of the ocean. The thought of how far the seabed was below us was pretty sobering. I got very little sleep that night as there was a violent storm. By this point I’d given up fearing the boat would capsize, but being that far out at sea alone was daunting. The next morning, I was emotional and tired. I remember a pod of dolphins appeared and jumped in front of the boat for ages. In my emotional state, I thought they knew we were in danger and were guiding us to safety. More storms were forecast with severe weather warnings.